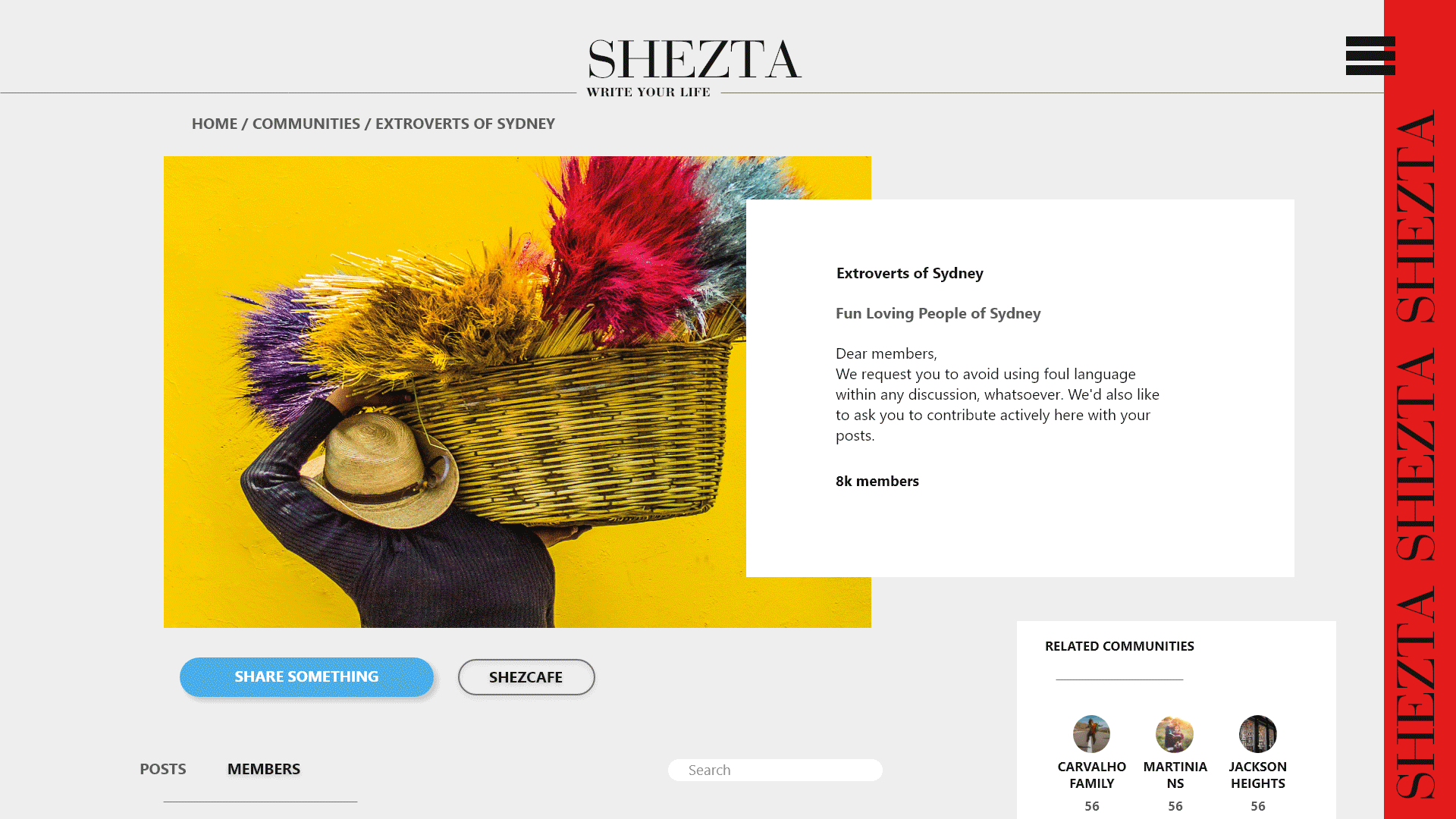 Shezta is a conceptual blogging platform that revolves around the theme of sharing one’s personal life and its issues through regular blogging. The website would also let users engage with each other on its chat sections.

In this case study, I am going to create an initial prototype of Shezta that can be taken as a source of inspiration to develop a final version of such a platform.

INSPIRED BY 'THE GUARDIAN'

The concept of Shezta came to my mind from The Guardian's Facebook handle where they would share articles from the common people that addressed their lives and problems at an individual level.

Not only these articles would let these people share their stores, but as well seek solutions and opinions from others. These articles attracted a larger audience than others for addressing issues that were common among people.

NOT SO EASY-TO-SELL NICHE

None of the popular social media platforms are entirely built around this theme. Instagram is more about pictures, Twitter lets you reach out to the people and be heard with your brief targeted messages, and Facebook is about entertaining you and by entertainment I mean everything that it does to make you stick to it.

Shezta is that one conceptual platform that asks its community to come here and share just everything about their lives with regular posts. Of course, it is a project that would be entirely dependent on its marketing campaigns presuming that its UX and UI are designed very good, if not great.

It would also be a challenge to actually build a community of great writers that would serve as Shezta’s assets that would attract more users. 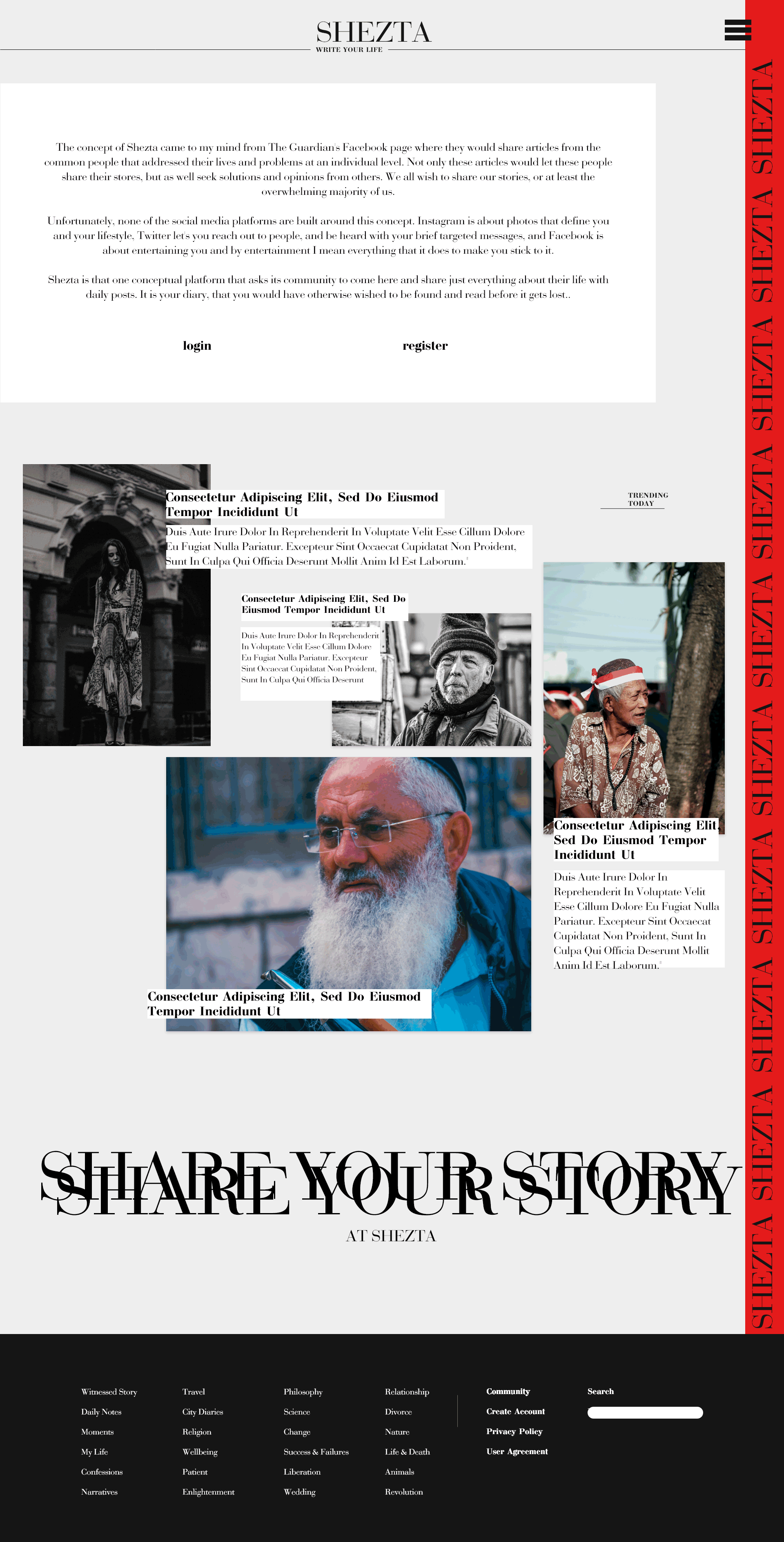 The red stripe on a right is something that I like for a differentiating point. However, I am not sure if I’d actually keep it in the final design considering that lighter colors are safer to use in UI. A completely dark shiny red strip might actually push away our users, without them realizing it.

The landing page has login and registration hyperlinks and I have not enclosed them inside buttons.

This page also shows some trending posts below the welcome section. The entire website would be algorithm-powered, and it will try to show the user the posts that the user might most likely be interested in reading. The menu slides in from the right and takes up nearly two-thirds of the screen.

I have kept four filters on the top. The first two, namely Popular and Trending, are inspired by Netflix. Trending accordingly would refer to those posts that have gained attraction over a shorter period of time as compared to Popular.

The other two filters (namely Global and my Network) let the user switch between posts from his people and posts from those out of his network. Wakie is a mobile app that has a global feed page that runs very fast. Users have their eyes on its posts, and they get to connect with others on common mental grounds.

I wanted this app to allow its users to reach out to those out of his/her network because often users might be new but they might be writing about an issue that entertains a larger audience and they might be seeking solutions to such issues or problems.

However, with a poor algorithm running this platform, this feed could, in fact, bore off our users. The page shows the posts with profile hyperlinks with writers’ names. It also displays some highlighted comments to increase engagement interest.

Users can search for posts and also proceed to write their own posts by clicking on the Share Something button. The right corner of the page shows users’ communities, ad space, and a block that shows friend suggestions.

I have stated previously, that any new app that doesn’t have a big following already should not ask for a lot of information from the users. Neither should such an app be overcrowded with features. 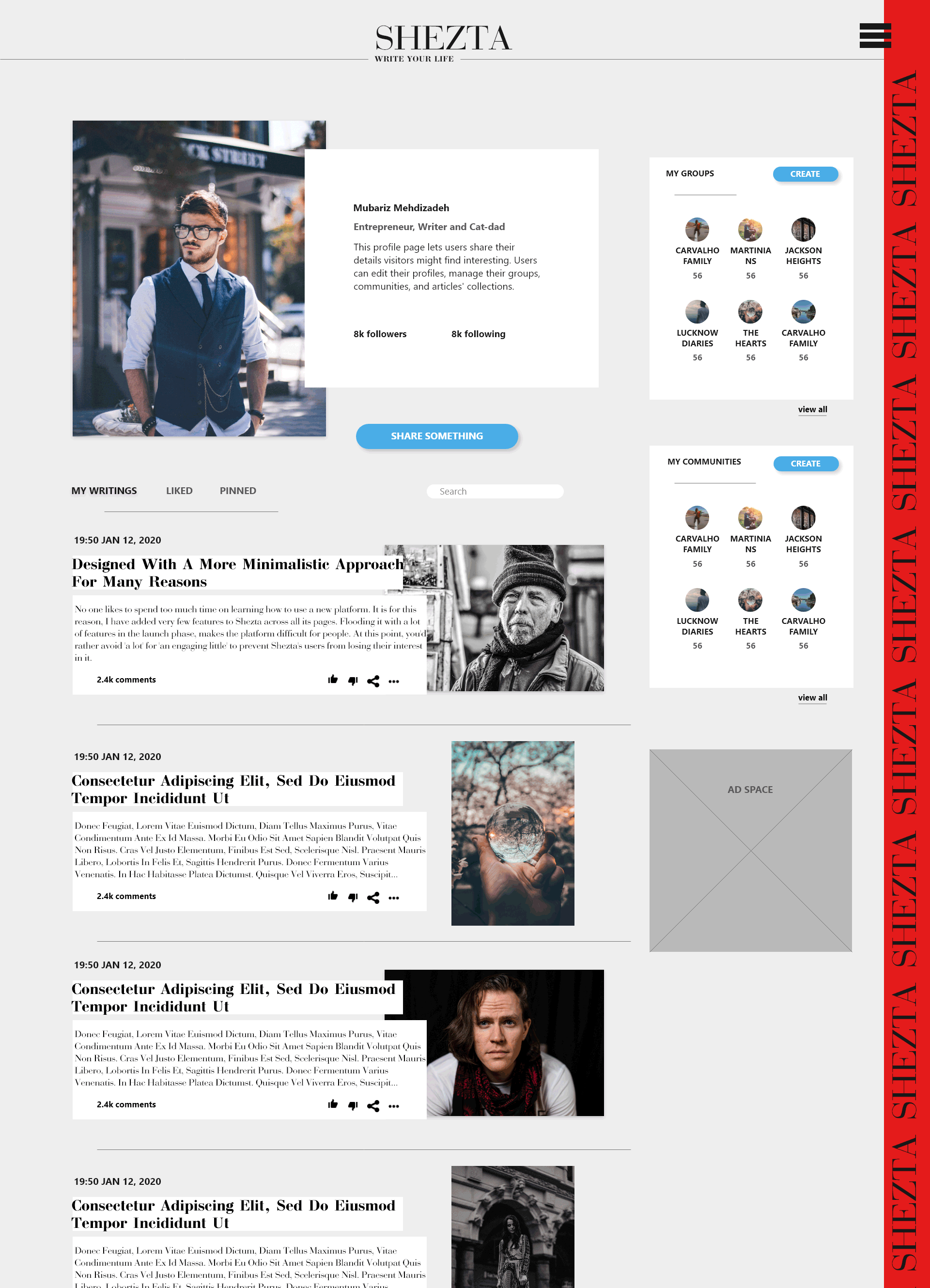 Following this opinion and also inspired by Instagram, the only display information that Shezta asks for from its users is the name, title and a brief intro, apart from asking basic details like gender and date of birth. Users can publish articles from here, and go through any posts they have liked or pinned in the posts.

As you can see that on the right side of the page, I have created blocks for communities and groups. At his point, I am leaving the difference between these two open to further research. If this were my startup, I might have expanded their differences through features or even dropped one of them or both from the UX, on grounds of further research and reasoning. For now, the groups are not searchable on the Shezta platform, while communities are and communities are supposed to be more open to people than groups.

I have put no colors here and kept his window very minimal in design so that the user can focus entirely on writing his/her thoughts out. The users can also choose to hide their names so that people may not know who posted this article. 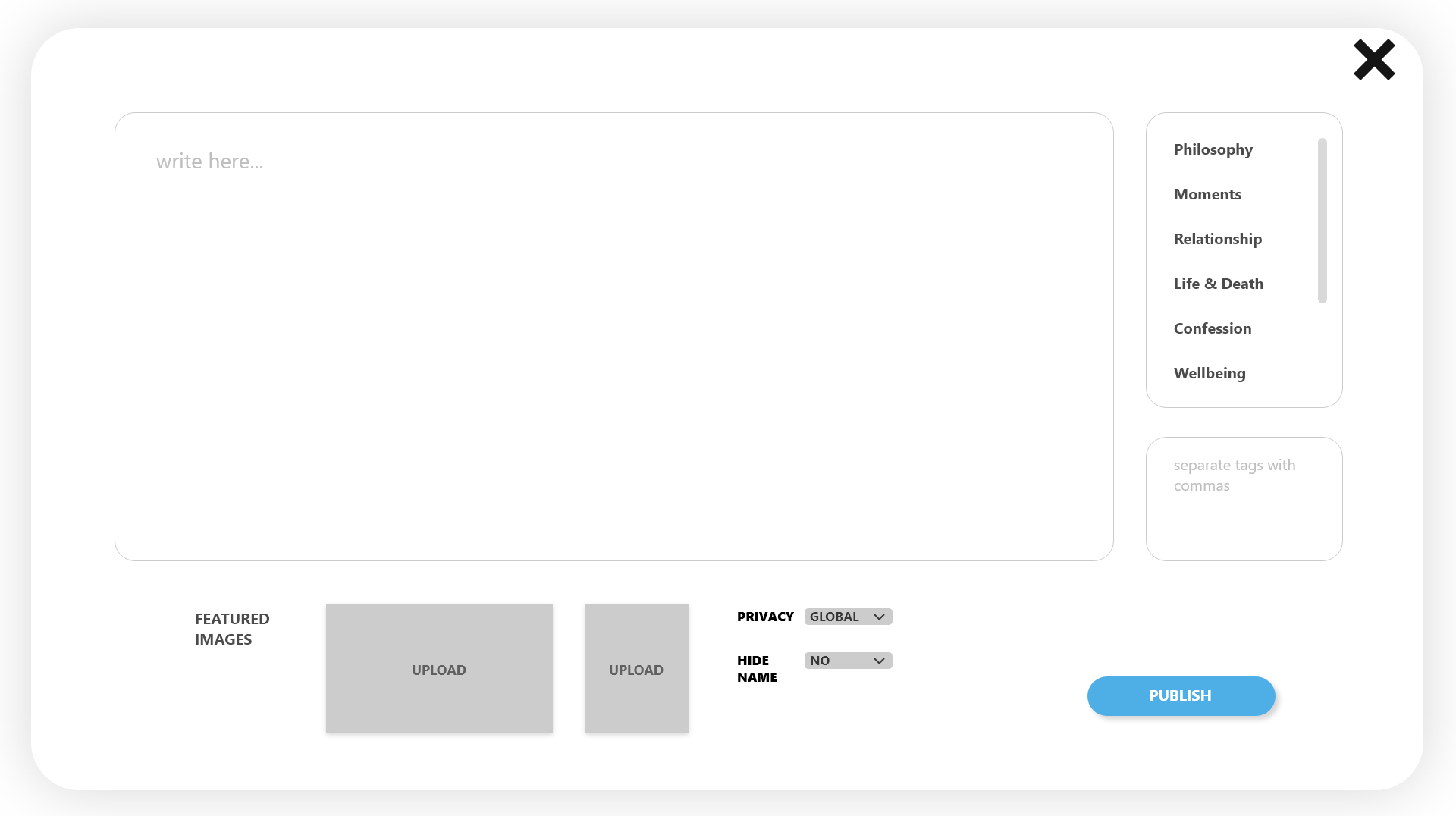 I am providing this feature because, on The Guardian’s Facebook stories, the names of people would be kept hidden because often these writers would seek solutions to their problems while narrating even the most personal aspects of their lives.

The users can type tags for their post, and select a category for it as well. This would help the algorithm in finding out the post’s audience. 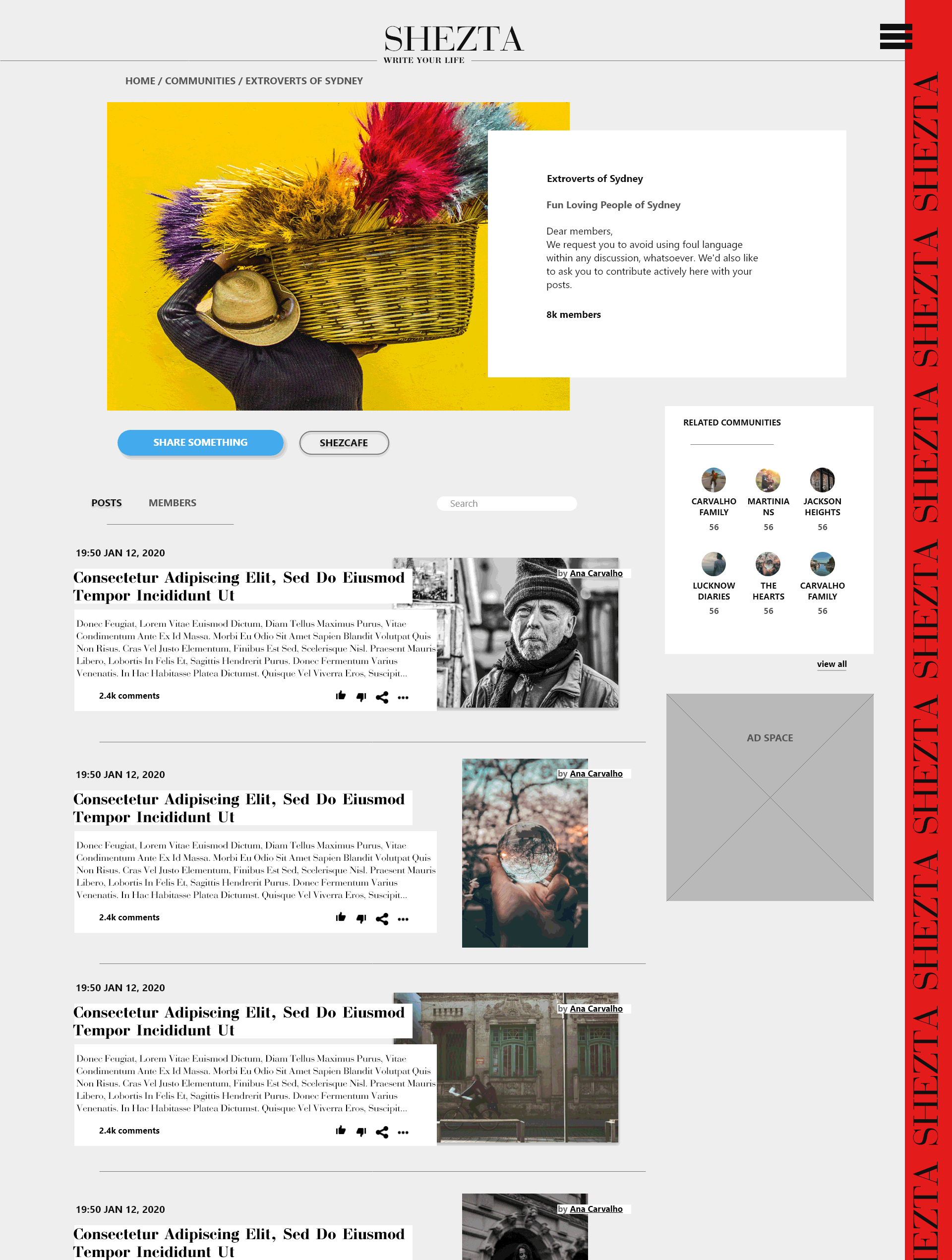 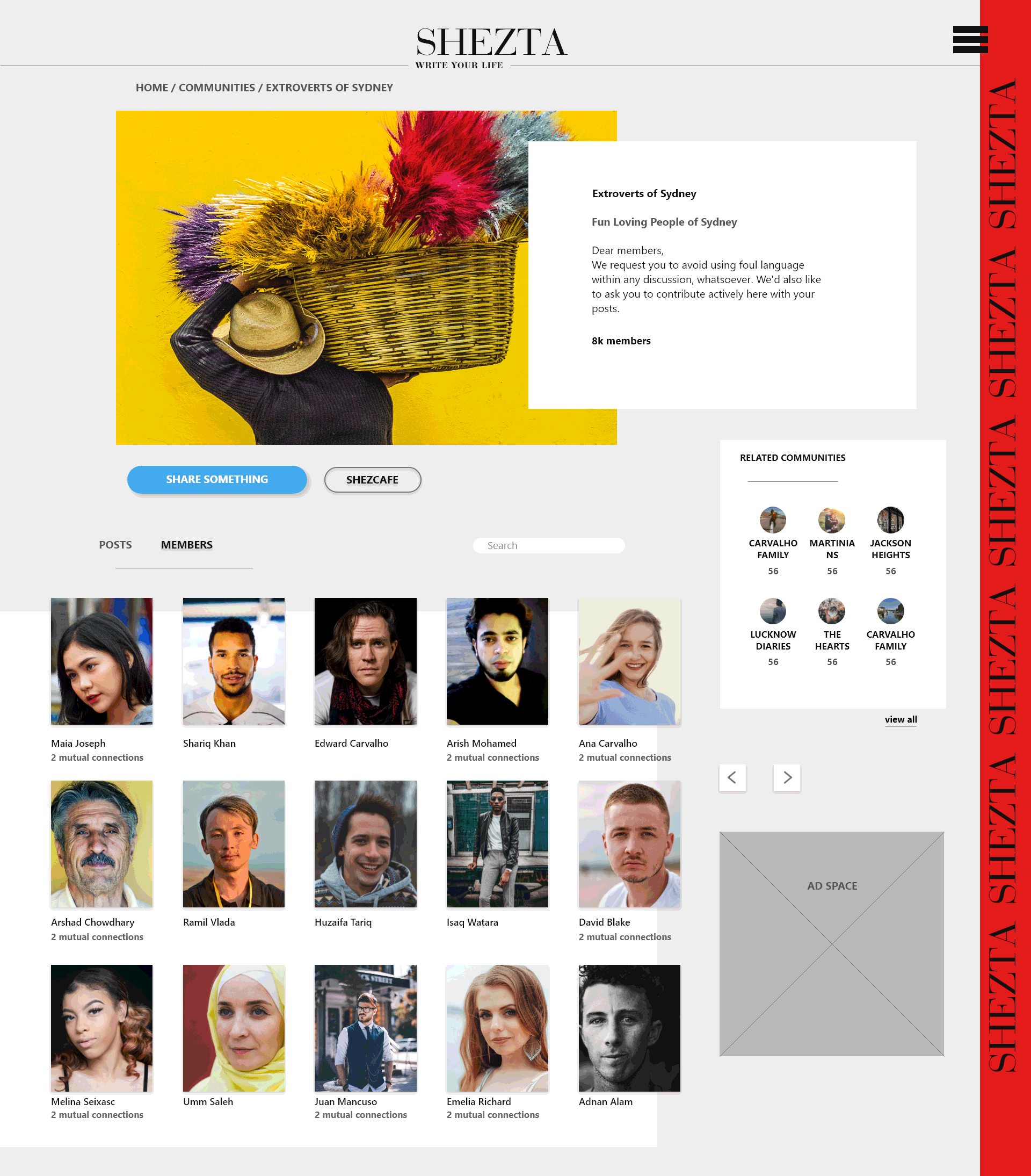 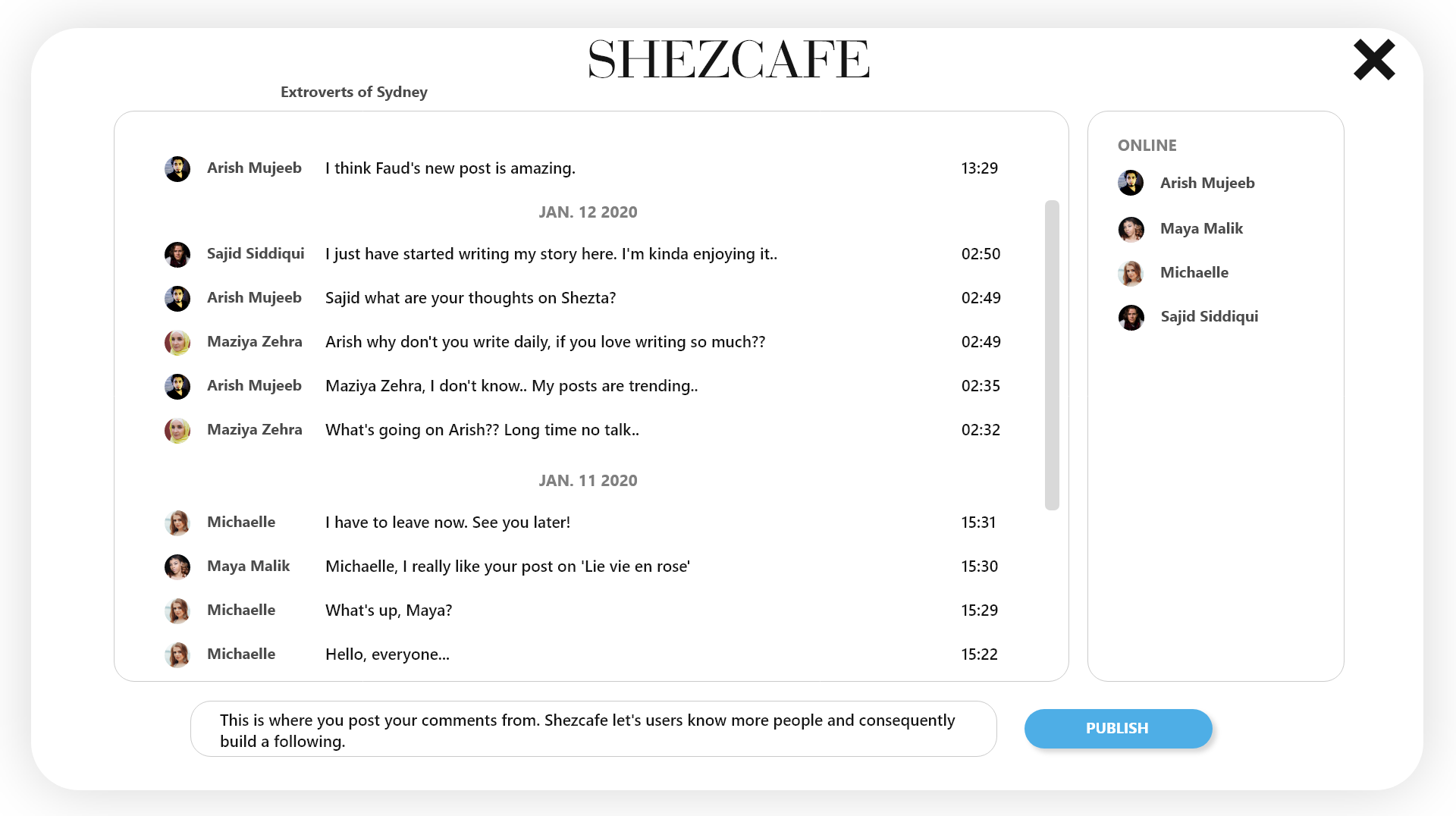 Members can find other members here, read each other’s posts, and chat together on Shezcafe. The reason why I am adding a chatroom (Shezcafe) to this portal is that it, in my opinion, attracts many people. I think it wasn’t the best idea for Yahoo to shutdown their chatrooms.

Every post opens up in this popup window. It shows the article, its details, and user comments. It lets visitors comment here. I have kept it minimal in design to allow readers to focus just on the posts.

STARTUPS ARE ABOUT STRATEGY

The success of this blogging platform would be dependent on strategic campaigns and much deeper research. Introducing it would be difficult. It would be necessary to create a trend that convinces people that this is where they can literally share anything and seek opinions and that this is The Guardian platform of social media platforms.

It’s not just the app UX and UI that counts in this case, but instead it would be about creating a trend that convinces people to come here and write what they wish to. Shezta is not a final prototype, but is supposed to be an initial prototype, as I have stated previously, that can be used to develop a more advanced final product.